Today, air pollution is one of the silent killers that many people are still not aware of. The fact is that nine out of ten people on Earth breathe polluted air, which can come in different forms. Many countries are taking preventative measure to control and eliminate air pollution as much as possible, but in some cases, there is only so much we can do.

More than 80% of the human population lives in areas that are exposed to higher pollution levels than the levels the WHO considers safe. But some countries are still not doing enough to limit the pollution, especially the low-income and the mid-level income countries. Air pollution is a major threat to a person’s health. 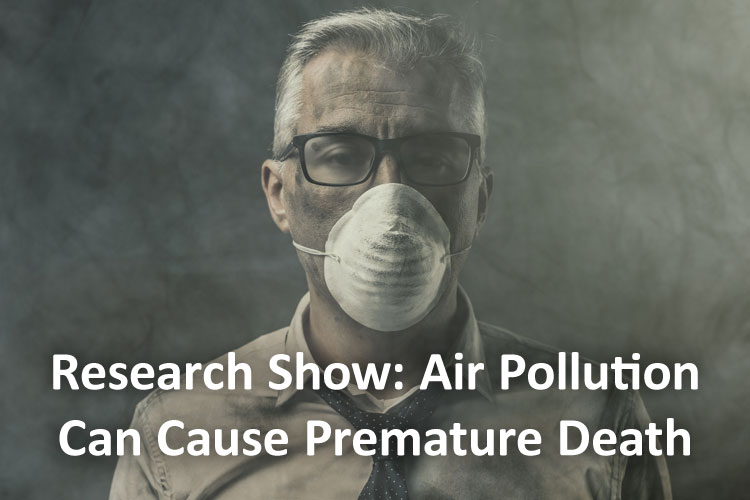 In fact, more than seven million people die due to air pollution, which is a rough estimate by WHO. Of course, air pollution is not a direct cause of death, but it can cause all sorts of problems for a person, and pollution does increase mortality.

Air pollution comes in different shapes and forms, and the major distinction is between two types: indoors and outdoors air pollution. The indoor pollution is more easily controllable by each individual, while with outdoor air pollution, we are, unfortunately, at the mercy of other people and mass air polluters that we cannot control.

The most common source, or type of air pollution, is smog. This is commonly seen in big cities where fog mixes with the smoke coming from factories and industrial plants, which creates this harmful mixture of air that can harm a person’s health, and deteriorate it over longer periods of time.

Some of the major causes of outdoor air pollution are high CO2 emissions, which come from vehicle smoke and from the smoke that is coming from factories and other power generation plants. Agricultural waste and heating systems are also major polluters.

Unfortunately, we are still at the mercy of the larger corporations that control these plants, and there is not much we can do. What we can do, however, is to decrease our use of vehicles and use other means of transport instead, such as public transport, cycles, and walking.

The general estimate that the WHO provides is that around 3.8 million people die each year due to indoor air pollution-related diseases and complications. The major reasons for indoor air pollution are exposure to smoke from cooking fires, as well as inefficient stoves and open hearths that can emit larger quantities of carbon monoxide, particulate matter, methane, and other volatile organic compounds.

The incidence of indoor air pollution is higher in low to middle-income countries where the technology of indoor heating systems is still in development, and is far behind the modern ways of heating.

Let’s look at some numbers that will uncover the size of the problem at hand.

How to Reduce Indoor Air Pollution?

Today, many people utilize various air purifier technologies. One of the most commonly used technologies is HEPA filters. HEPA filters (high-efficiency particulate air filters) are a form of air purifiers that make sure that the air is as free of pollutants and particles as possible. They are tested and approved, and must reach the desired levels to be approved.

HEPA filters are commonly seen in production plants where the pollution levels are higher than everywhere else, such as in vehicles, medical devices, semiconductors, nuclear, food, and pharmaceutical products, and more importantly, in homes.

You can utilize HEPA filters all over your home, and with many appliances. For example, HEPA filters can be very efficient with vacuum cleaners, and they eliminate a big portion of pollutants. Many people with allergies and asthma make use of a HEPA filter in one shape or another.

You could also use other types of air purifiers, such as activated carbon, ionizing, ozone, UV technology, although HEPA filters are possibly the most viable option right now. Protecting your home from indoor air pollution can help your health massively, and you can make big strides towards providing healthier air in your household.

How to Reduce Air Pollution in Your Car?

Similarly, you can contribute towards a healthier environment by installing air purifying devices on your own vehicle. There are many good air purifiers that are geared especially towards eliminating air pollution in your car.

As we know, cars emit high levels of CO2, which can contribute to air pollution, but it can also get trapped within your car, and can directly harm your health if you are not protected against it. Luckily, you can utilize car purifiers that will purify and actively clean the air within your vehicle, which will protect you from air pollution.

The technology has become very advanced over the last couple of years, and there are many new and effective car purifiers each year. You can install it simply through the USB port within your vehicle, or can be plugged in your cigarette department.

These air purifiers work in a similar way as HEPA filters; in fact, many utilize HEPA filters themselves, which make sure that any larger particles in the air will get caught in the filter. Another thing with these purifiers is that they are so easy to install, and they don’t present a huge investment.

Does a Face Mask Work for Air Pollution?

Perhaps you have been to China, or you might have seen footage of the Chinese people wearing these masks. It turns out, it is not such a bad idea to wear these after all, as they can protect a person from all the high levels of air pollution and the smog, which is especially high in Chinese cities.

But it would make sense to get an air mask if you think that air pollution is causing health problems. It doesn’t matter if you will be looked at weirdly, what matters is your health. And the good news is that there are many high-quality providers of face masks that you can buy the face masks from, and they are readily available in many local shops, even.

Air pollution is a massive problem in modern society. It is something that is caused by human-related industries and sources, and luckily, there are strides each year to reduce air pollution and to control the sources of air pollution. As it turns out, there are also many preventive measures you can take to reduce the pollution in your home and in your car.