If you’re a pet owner, then you know how difficult it can be to deal with the mess that pets can create. Pets will produce a lot of byproducts that will pollute your home. For example, dogs and cats will leave fur behind, while other pets (most of them) will leave unpleasant smells and odors behind them. It’s an uncomfortable situation that’s quite difficult to solve. 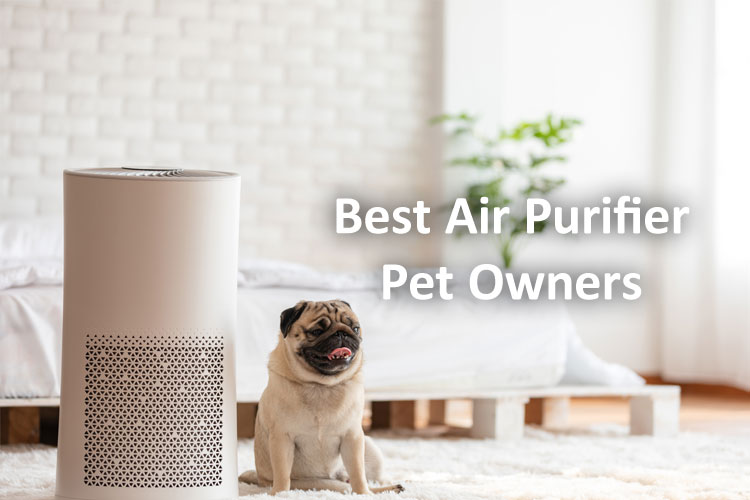 A lot of people are also allergic to pet dander. And you can easily resolve these allergies by buying a good air purifier. This purifier should be capable of removing pet dander, odors, and other allergens that a pet can produce.

This means having a good purifier with a strong HEPA filter or air filter, activated carbon filter that’ll remove odors, and other filters that will help with air quality.

But there are some additional factors that you need to consider. For example, you will need a good purifier that works relatively silently. That’s good for not disturbing your pets, as some of them can get scared quite easily by the purifier.

With so many choices now on the market, making the right decision is intimidating. That’s what we’re here for. In this article, we’ll take a look at the best air purifiers for pet owners.

Here, we’ll analyze the 5 best air purifiers and discuss their pros and cons. Hopefully, you’ll be able to make the right decision after this analysis.

First up, the Winix HR900. We think that this device is one of the best when it comes to pet owners. It’s affordable, very effective, great for removing odors, and also relatively silent.

There is a lot to like about this purifier. First of all, the filtration efficiency. It has a True HEPA filter, which is bound to remove almost all of the airborne pollutants; to be more specific, it has an efficiency of 99.97% for particles of 0.3 microns or larger. This makes sure the purifier removes all pet dander effectively.

The best thing about this purifier is its ability to remove odors and unpleasant smells. It does that with the Advanced Odor Control Carbon Filter (AOCTM), which is one of the best carbon filters that money can buy.

That’s the perfect feature to have in a purifier, especially if you are a pet owner and are struggling to remove all the odors and smells from your pets.

This purifier is the perfect solution for pet owners. It removes pet dander, the smells from pets, but also most of the other airborne pollutants. It also runs quietly, looks great, and is affordable. So, there’s something for everyone in this package, especially for pet owners.

Maybe you’ve already heard about this product – the Alen BreatheSmart air purifier. It’s one of the most demanded air purifiers, and that speaks volumes about its quality.

The performance of this device is a joy to behold. It’s capable of cleaning 700 sq. ft. of space every 30 minutes, making it a great purifier for short bursts of powerful filtration.

To do this, it has a True HEPA filter, which is a known quantity in the business of air purifiers. Practically, it’s the holy grail that most devices try to achieve, but fail.

This one does it, and it manages to do within a reasonable budget. And the purifier is also capable of removing pet odors efficiently, as well as the majority of airborne pollutants.

Pet dander will be gone, as will pollen, dust, mold and other pollutants. But in this article, we’re looking at purifiers for pet owners. From that perspective, it’s a great option.

That’s also thanks to the very silent operation that this device offers. Namely, it has a built-in technology called the WhisperMax technology, which makes sure that the device works silently as you try to keep your pets calm and your air clean. What this means is that the device produces the so-called “pink noises” at night, letting you and your pets sleep calmly.

Besides, it looks fantastic. It will fit right into your rooms and with modern design.

Arithereal provides us an excellent option if you’re looking for a good air purifier. This device is all about performance – from the quality, three-stage filtration, to some amazing smart control options and an elegant, sleek design.

The filtration process is made up from three different filtration media: the pre-filter, the True HEPA filter, and the activated carbon filter. All of these are made specifically for removing pet dander and pet odors, and of course, other pollutants in the air.

Why this one is a great choice for pets is because the True HEPA filter removes pet dander, while the activated carbon filter gets rid of odors and smells.

If you’re something of a geek when it comes to tech, then you’ll love this one. It certainly is techy, as you have access to various smart controls and functions. It uses an automatic detector to measure air and determine the quality, upon which the device decides on its own to start purifying, or if it needs to rest.

It can purify an area of up to 355 square feet, which is more than enough for offices, rooms, and even larger areas in your home. But if you need a silent performance, then you shall get it.

Because this device has a sleep mode that makes sure you and your pets will be able to sleep tight, while the air is free of odors and pollutants that come from pets.

Again, if you like something that’s a bit more technical, you’ll love this device. The Levoit smart air purifier is a smart device that will allow you to connect your smartphone to the device, and control it from anywhere.

In addition, it will also connect to Alexa, making it the perfect choice for people that want to control the purifier remotely.

There’s more to it than just these technicalities, though. We must also praise the performance, especially for the price you’re paying for the device. It has a True HEPA filter and an activated carbon filter.

We’ve seen this combination before, and we can safely say that it works here as well. For removing pet dander and pet odors, there is possibly no better combination.

And you get all of this at a very affordable price. The voice control with Alexa is nice obviously, as is the remote control with a smartphone. You can also control the device easily with a pre-set timer that will turn the device on or off when you need it and when you don’t.

Additionally, the device is whisper quiet, which is an important feature to have if you have pets. As they can get easily intimidated and scared by technical stuff like this that tends to make noise. All in all, a great choice, albeit a slightly more technology-packed.

The Germ Guardian air purifier is a slightly different device that will allow you to clean the air in even the largest of rooms. It’s effective for removing pet dander, pollen, dust, and other airborne pollutants. It comes in the form of a tower, which is something a little bit different from the rest.

Again, we see the winning formula with this purifier as well. The famous three-stage filtration: the pre-filter, True HEPA filter, and the activated carbon filter.

It’s the best setup for pet owners, as these filters are very capable of removing pet dander and odors. Additionally, a great feature of this product is the ability to stay silent, even when in the more powerful modes of operation.

You’ll have access to five fan speed settings: at the lowest setting, it’s all about silence and a quiet operation. At the highest setting, you’ll seek to remove pollutants as fast as possible. The best compromise is probably somewhere in the middle.

For such a compact device, the coverage area is quite impressive. It is ideal for rooms of up to 167 square feet, which, for the device of this size, is impressive. After all, it has so many positive reviews that there’s not that much to say about it that’s negative.

Can Pets Cause Allergy?

It’s a well-known fact that many people are allergic to pets. While this sounds somewhat rude, it’s sadly an unavoidable fact. But they are not allergic to pets themselves, but rather to the pet dander that can be the causing factor for various allergies, breathing problems, and sneezing or coughing.

Those with asthma will also sometimes complain when they’re around pets. That’s why it’s even more important to have a good air purifier. It will remove the pet dander effectively while also getting rid of the odors that some pets will emit.

This dander is a special protein called the Feld 1 protein, that will cause the allergies. And this protein will find itself on the skin of an animal, and when it sheds fur or feathers, this protein can find its way onto our bodies and into our system. That’s what causes an allergic reaction.

Is Pet Dander Dangerous for Your Health?

In essence, pet dander is not that dangerous for our health. But in the long-term, it can definitely cause some problems with the respiratory system, especially for people who are already at a higher risk of those problems.

So, for people who often suffer from allergic attacks, pet dander is just one of the triggers of allergic reactions. The dander gets into our lungs, and if there’s a lot of it, it can potentially be harmful as well.

Can You Run an Air Purifier all the Time?

You can run the purifier all the time, although there’s no reason to do that. It’s better to run it for a few hours and then turn it off. The best way to use it is at night, if it has the silent option, of course.

Using it all the time will consume your power and cause high electricity bills, and the filters will get clogged up faster. This adds additional costs of filter replacement.

It’s better to be sensible and use the purifier when we need it and not all the time.

Is an Air Purifier Bad for Your Pets?

In essence, no, the purifiers we provided in this list are not bad for your pets. But some of them can be. For instance, if you would use an ionizer or a UV purifier or even an ozone generator, then it could be harmful for the pets. But the purifiers we mentioned only use HEPA filters and activated carbon filters, which are not harmful to pets at all.

However, the problem arises if the purifier is too noisy. Some animals might be scared of it as a result.

For pet owners, there comes a time when they have to consider an air purifier. Especially if they have several pets. The more pets you have, the more pet dander they will produce.

And those suffering from allergies will benefit greatly from a good air purifier.