The world of air purifiers is striving to keep up with the demands of the latest technology. And that is where the Dyson Pure Cool TP04 air purifier comes into play. It’s a smart device that manages to capture the perfect balance between technology, performance, design, and price. 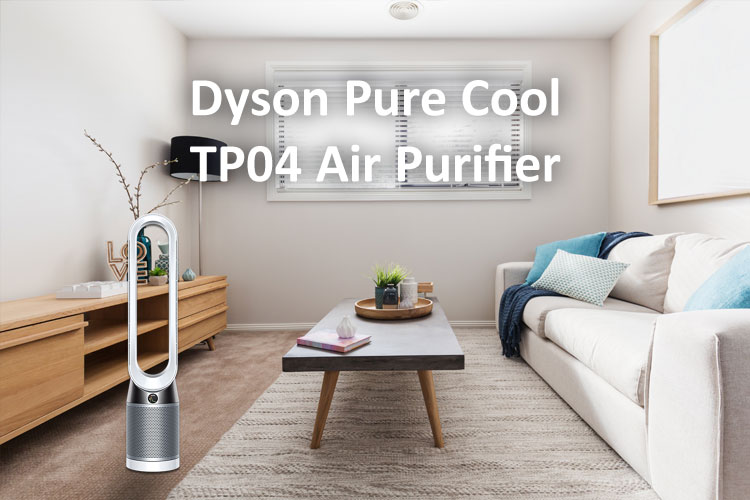 To be more exact, this isn’t just an air purifier. It’s a purifying fan, meaning that it captures polluted air, recycles it and cleans it, and then moves it back onto the room. But that’s done better than most air purifiers of its size do, mostly thanks to its design.

The fan is truly something unique; this oval-shaped fan with the hole in the middle looks like an alien antenna, but it serves a very practical function.

But what does this air purifier have in store for you, the buyer? Is it worth a buy, and what are the pros and cons of the device? Stay tuned and find out more about it.

The Dyson Pure Cool TP04 is a very modern air purifier with many fantastic, technologically-advanced functions.

If you’re wondering about these technical things, then there’s plenty in store for you. The device is Wi-Fi connectible, meaning that you can translate all the data from the purifier to your smartphone.

In addition, you can easily control your device with the smartphone using the Dyson Link app. It’s a very convenient function if you’re looking for a device with remote control.

Secondly, it’s Alexa-enabled, so you can also control it with your voice. Simply connect it to Alexa (if you have it) and get all the benefits. In addition, this air purifier has a screen that tells you the current performance levels, the air monitoring levels, and the overall performance of your filter.

Speaking of the filter, the Dyson Pure Cool TP04 has plenty in store for you. Inside the “engine” of the purifier, you’ll find a filter that rotates around to collect the debris and dirt, and the airborne pollutants.

It’s a 2-in-1 filter, with HEPA filter and the activated carbon filter included. This removes 99.97% of all pollutants and removes smells and odors from the air.

In addition to the purifying function, there’s also the fan function that distributes the air into all directions. That’s thanks to the 360-degree spinning fan head that provides fresh air to the room.

All in all, an interesting and certainly unique air purifying fan that gets the job done.

What are the pros and cons of the air purifier?

+ Very unique design with the spinning fan head that distributes the air throughout the whole room.

+ Fantastic performance with the 2-in-1 filter. This includes the HEPA filter and the activated carbon filter.

+ Technologically-advanced device with several useful functions. It’s compatible with Alexa, and you can also easily connect it to your smartphone via Wi-Fi and control the device from there. Another technological feature is the screen that conveys the settings of the device.

+ 360-degree spinning fan which enables the quality of the air to be distributed throughout the whole room.

– After a while, the purifier can get noisy. Some users have reported that after several days of continuous use, it can get very noisy, especially at the higher settings.

– No warranty is offered in the package.

– Some users have also reported that the purifier went dead after several weeks of usage.

What is the Dyson Pure Cool Air Purifier Good For?

If you suffer from allergies, asthma, breathing problems, poor air quality, then you should certainly consider this device. Here is what the air purifier can remove:

Here’s the deal: if you’re tired of air purifiers that offer little to no technicality, then this one is the one to choose. That’s mainly thanks to its technologically-advanced functions. To start with, you’ll have access to remote control of the device, as you’ll be able to connect to it via Wi-Fi with your smartphone device.

Additionally, it features Alexa-connectivity, which is another feature for all of users who have Alexa and who want to control it with voice control.

Asthmatics and allergy sufferers will definitely find this device useful. Those who have a poor indoor air quality full of smoke, odors, and other pollutants, then you should certainly consider this purifier.

Is the Dyson Pure Cool Air Purifier Good for Asthma?

Yes, this device is certainly one that asthmatics should consider. Asthma can be made worse by poor indoor air quality. In fact, it’s the number one reason why asthmatics usually suffer from asthma attacks.

If you’re an asthmatic, then you’ll want to minimize the risk of asthma attacks as much as possible. That means removing all pollutants from the air that can cause asthma, and this device won’t let you down.

Dust mites and pollen are usually the most common causes of asthma attacks. However, other particles will also cause unwarranted asthma attacks, and you will want to minimize these risks as an asthmatic as much as possible.

Additionally, allergy sufferers will also find this purifier helpful. As it removes the pollutants and allergens, such as dust, mold, pet dander, pollen, and others, you’ll be able to enjoy the benefits of this device almost instantly. The best of all is that it distributes the purifier, quality air throughout the whole room, thanks to its unique fan design.

How Often Should You Change Filters on Dyson Pure Cool?

There are two main filters inside the purifier: the HEPA filter and the activated carbon filter.

In essence, HEPA filters will hold up well for a couple of months before they need replacing. With more use these filters will get clogged up, meaning that they won’t be as effective as before.

What makes it even worse is the usage – the more we use the purifier, the dirtier the filter will be. A good guideline is to replace the HEPA filter every 5-7 months of usage; in some cases, even more often.

The activated carbon inside the filter traps the pollutants and odors within the pores inside the particles of the carbon. Once these granules get filled up, the filter needs replacing. This happens every 5-6 months of regular usage.

Yes, the Dyson Pure Cool air purifier is capable of removing airborne pollutants even in the large rooms. However, you shouldn’t consider it for various warehouses or large basements where there is a big demand for purifying.

This purifier comes to life inside a household, especially in the larger rooms. That’s mainly thanks to its unique fan design that distributes the air all across the room. But the HEPA filter inside is also quite powerful, and it will be capable of cleaning large rooms.

But if you need this purifier for smaller rooms, it will do more than a good job. We think that this device is at its best in living rooms or larger bedrooms where the air quality is relatively poor.

What you need to keep in mind is the placement – as long as the purifier is placed somewhere in the middle of the room, it can be a great device even for the largest of rooms.

Is the Dyson Pure Cool Air Purifier Worth the Money?

Now, onto the big question: is the Dyson Pure Cool air purifier worth the money?

We say yes, this air purifier is completely worth the asking price. Although there are some cons to go with the device, you simply have to appreciate the build and the technologically-advanced features. It’s one of the best devices for remote control and for monitoring the air quality at the same time.

So, there you have it, the review of the Dyson Pure Cool air purifier. If you’re looking for a technologically-advanced air purifier with some great features and a quality performance, then you should certainly consider this purifier.

It does have its cons, such as the noisy performance after a while, and you’ll also need to replace the filters every few months. But in our opinion, the air purifier is completely worth the money.