The Levoit LV-H133 air purifier is an excellent choice for those who are looking for a good air purifier for large rooms. Levoit is known for producing some of the best products when it comes to air purification. However, they are really close to reaching the top with this product. 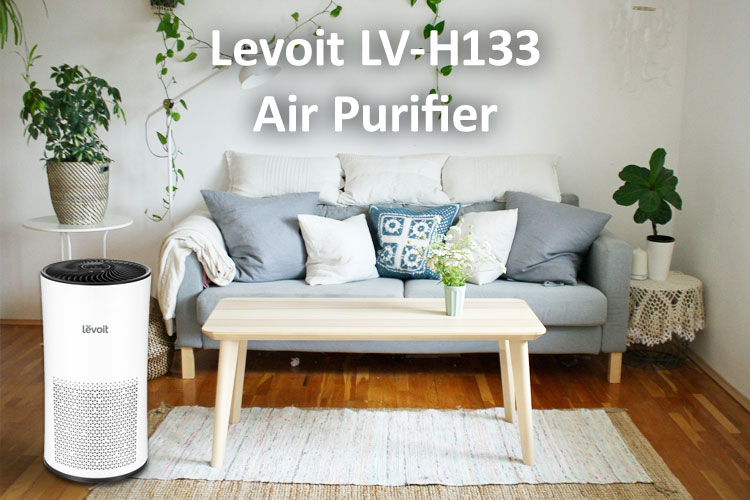 If your home is full of odors and smells, you’ll be able to enjoy the benefits of this purifier. After the HEPA filter comes the activated carbon filter, which actively removes the odors and smells.

From the high-quality performance, to the excellent design, this purifier has it all. If you want to find out more about this device stay tuned. We’ve dived deep into the specifications and reviews to bring you this lengthy and thorough review of the Levoit LV-H133 air purifier.

The Levoit LV-H133 air purifier is an excellent choice for people who are looking to clean indoor air in larger rooms. It produces a stellar performance with the purification media. Firstly, the air goes through the washable pre-filter. You’ll need to clean and wash this filter from time to time, as it will get full of debris and airborne particles.

Then, the air goes through the core filter – the True HEPA filter. With this filtering device, it’s typical to see a good performance, as it’s one of the best air purification filters on the market.

It actively removes 99.97% of all the airborne pollutants. Mold, dust, debris, pollen, and other pollutants are very common inside larger rooms, and this filter will be able to clear most of them.

Then there is also the activated carbon filter. With this one, it’s typical to be able to remove various odors and smells that get left with the pre-filter. This three-stage filtration is one of the best filtering combinations out there, and it’s also one of the most common.

The design of the purifier is also relatively unique. It’s a purifying tower, which is a great type of design for larger rooms. Its design enables it to purify air in 881 square feet in only half an hour. That’s an exceptional level of performance, especially from the purifier of this size.

The controls of the device are also great. It allows you to use the purifier in every way you need it to work. Firstly, there’s the option to control 3 fan speeds, timer function, display on/of, filter indicator, auto mode, and the sleep mode.

So what are the pros and cons of this feature-packed device?

+ H13 HEPA filter, activated carbon filter, and the pre-filter make sure that the air quality is on a premium standard.

+ An excellent purifier for larger rooms, thanks to its powerful performance and the design.

+ Great, intuitive controls that allow you to control the function of the filter. If you need it to operate on a high level, or if you need a silent performance, you can easily control it.

– It can get noisy after a while.

– Filters need replacing constantly, which adds an additional cost to the table.

The Levoit LV-H133 purifier is a bit of a versatile machine. Whatever you need it to do, it’ll do it. Firstly, it’s a great purifier if you need to improve the air quality within your home.

That’s if you’re suffering from asthma or if you are an allergic. Various pollutants are allergy and asthma triggers, and this purifier makes sure that there are little to no such pollutants in the air.

The three-stage filtration removes all sorts of pollutants, including pollen, dust and dust mites, pet dander and smells, smoke and odors, and other pollutants in the air.

This makes sure that the purifier is a great option for those who need a good purifier that will help them with their asthma or allergy.

Many people are wondering whether this purifier can cover large rooms – the answer is yes, it can. That’s mainly thanks to its high performance levels, which can be adjusted to your needs, of course.

All in all, the purifier is a very complete option if you’re looking for a good device that will clean your larger rooms. You simply can’t go wrong with it.

What is H13 True HEPA Filter?

These filters are HEPA-type filters, which are almost as good as True HEPA filters, just not as powerful and effective.

H13 HEPA filters will remove up to 99.97% of all airborne pollutants, as it will trap particles of 0.3 microns or larger. It’s definitely a great choice if you’re looking to trap smaller particles, such as dust and bacteria that can easily cause allergies and asthma.

Some other filters that claim to be HEPA filters are not as effective as H13 True HEPA filters. These will only offer you a performance and efficiency of up to 95%, which is a big difference when it comes to pollutant removal.

The Levoit air purifier uses the H13 True HEPA filter, which is one of the best filters on the market right now.

How to Change Filters on Levoit LV-H133?

Changing filters on this purifier is relatively simple. You’ll have to follow the instructions given in the manual, but you won’t need to be an engineer or a scientist to work it out.

Simply open the device, take the filter out that needs replacing, and insert the new one.

As to how often you’ll need to replace the filter, it really depends on how much you use the filter and the quality of the filter. HEPA filters can usually last for 5-7 months, although that number is relatively lower if you use the purifier a lot.

The same goes for activated carbon filter – this one will get used up the more it’s used. Replacing it from time to time is necessary to keep the purifier running at higher levels.

Is the Levoit LV-H133 Good for Larger Rooms?

Yes, one of the best things about this purifier is that it’s great for larger rooms. That’s mainly due to its high performance levels at the higher fan speeds.

It has three fan speeds – at the highest speed, the purifier is capable of purifying up to 800 sq. ft. of air in just half an hour.

And this makes this device an excellent choice for larger rooms. However, if you need a silent performance and a good level of purifying at the same time, you’ll also be able to achieve that with this purifier.

You’ll simply need to turn down the fan speed slightly, and the purifier will still be capable of producing a relatively high level of performance.

If you’re looking for a purifier for large rooms, you simply can’t go wrong with this one. Whether it’s your living room, basement, large bedroom, or multiple rooms at the same time, it will get the job done.

Does Levoit LV-H133 Come with a User Manual?

Yes, when you purchase a Levoit air purifier, the user manual in usually included in the box. If you don’t want to keep the user manual, you can always find it online.

You can find the English version of the Levoit LV-H133 here: Download User Manual

Is the Purifier Worth the Money?

Yes, the purifier is completely worth the money in our opinion. While it does come with its own drawbacks, you’ll be able to enjoy the high performance levels of the purifier.

It has a powerful, three-stage filtration. Add to that the excellent fan controls of the device, and you’ll be able to enjoy a purifier that’s completely worth every penny.

The Levoit LV-H133 purifier is one of the best purifiers for the money asked. It’s a great purifier for large rooms, and the best of it is that you won’t have to spend a fortune on it.

In this review, we’ve looked at the purifier in more depth and analyzed its pros and cons. Hopefully, it was helpful for you and we’ve made your decision a little bit easier.