Every once in a while, you discover a product that’s changing the quality of your life. And that’s what the Medify MA-40 2.0 medical grade air purifier is all about. It’s one of the most effective air purifiers out there, with the H13, medical-grade purification readily available for our needs. 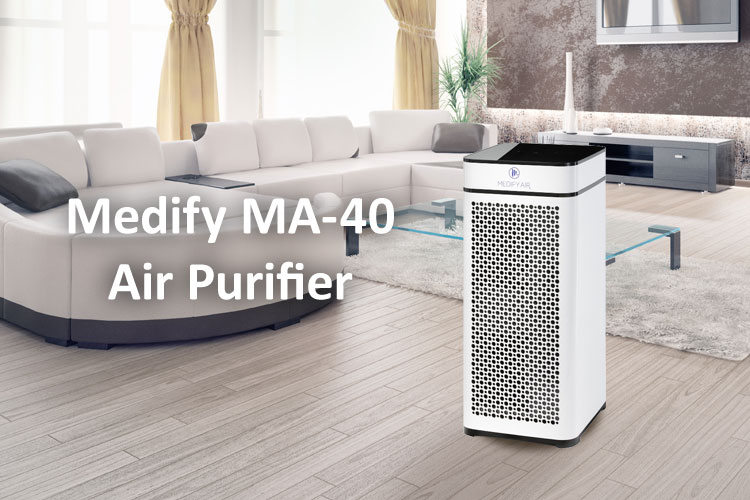 For those who are looking for a performance air purifier, the Medify MA-40 2.0 is certainly a device they should consider. That’s mainly thanks to the filtering media, but also the capability to clean huge loads in short spaces of time.

In this article, we’ll take a complete look at the purifier, and determine whether it’s worth buying or not. We’ll also take a look at all the specifications and see what are the pros and cons of the air purifier.

If you’re interested in buying the air purifier, then stick around: there’s plenty of useful information for you here.

The air purifier is the perfect blend between technology and performance. To start with, we have to mention the filtration media within the purifier.

Then there’s also a carbon filter that removes smoke, odors, formaldehyde, and other smaller particles that might still be in the air.

And if you’re still not pleased with the filtration after the air passes through these two filters, then there’s also an anion generator. This one is up to you: you can use it if you want to, or you can leave it off.

The anion filter produces negative ions that trap themselves onto airborne pollutants and removes them from air. It’s a great option to have if you are still worried about bacteria and viruses.

We also have to mention the design of this device. Its exterior is made from tempered glass, which makes it look like a smartphone. But nonetheless, it’s not a bulky device, but it still covers a lot of area.

It’s also a quiet device. There’s a night mode included, so you can turn it down when you want to keep it quiet or when you’re asleep.

There are two other speeds to choose from. At the higher speeds, the purifier will do everything it can to make the air clean. Although you do compromise on the silence a bit.

So what are the pros and cons of the air purifier?

+ Three fan speeds to choose from, plus the silent mode.

– Can get noisy at the highest fan speed.

The Medify MA-40 2.0 is one of the best air purifiers if you’re looking for performance for an affordable price. It is capable of removing almost all airborne pollutants of 0.1 microns or larger. Additionally, it removes odors and smells and any possible toxins that might still be in the air.

I’m sure that allergy sufferers and asthmatics will appreciate the quality of the purifier. In addition, there’s plenty of controls to use, which gives you the ability to control the purifier completely.

If you want to sleep and purify the air at the same time, you can do that easily with the Sleep mode. If you want maximum performance, then you can simply use the highest fan speed.

The purifier is also great if you want to remove smoke or various odors from your home. The carbon filter works against these pollutants and odors to bring you the freshest quality of air possible.

The H13 True HEPA filter is very similar to the usual True HEPA filters, only that it is even more effective. To be more precise, it brings you an effectiveness of 99.97%, and it removes pollutants that are of 0.1 microns or larger.

If you’re worried about your indoor air quality, but you don’t know which type of filter to buy, then you simply can’t go wrong with an H13 True HEPA filter – it’s one of the best filtering media that money can buy at the moment.

How Often Do You Need to Change Filters on Medify MA-40?

There are only two filters that you need to change on this air purifier. Firstly, there’s the H13 True HEPA filter, which will last you quite a long time. However, you will need to replace it after about 6 months of regular usage. But note that this number is only an estimate, and what most users of the filter experience.

And the carbon filter will also need replacement. That’s because the carbon granules inside the filter can only hold so much, and once they get used completely, you’ll need to remove it. As for the anion generator, you won’t need to replace anything, even if you use it constantly.

While it is true that these filters can provide an additional cost to the purifier, you’ll get the benefits of having a constantly fresh filter. This can make the world of difference; having a fresh filter constantly will make the purifier more effective, and the air cleaner. So you will need to keep regular maintenance of the device.

Is the Medify MA-40 2.0 Air Purifier Good for Large Rooms?

Thanks to its design, the device is able to process a lot of air. The openings that allow the air to escape from the device are all over the body, which makes it easier for the purifier to distribute fresh air around the room. And at the highest fan speeds, the purifier is even capable of cleaning the largest of rooms, or even multiple rooms at the same time.

The CADR rating of the purifier is 330, which is a fairly high rating, especially for the device of this size. And the best of all is that the purifier is compact, as it won’t take too much space. You can simply place it in the middle of your living room, and you won’t even notice that it’s there.

Is the Medify MA-40 Air Purifier Worth the Money?

Yes, the purifier is absolutely worth the money. It’s hard to get an H13 True HEPA filter purifier at a more affordable price. Firstly, it’s a very powerful air purifier, as it’s capable of removing almost 99.97% of all airborne pollutants with its filtration media.

But it has a lot more going for it than just the filtration media. The performance is supreme, as it’s capable of cleaning large spaces in a very short amount of time.

And it does that without taking up too much space in your home. In addition, the design is very modern and sleek, although there are some features missing that some people will miss.

That’s remote functions and perhaps some smart features. Additionally, the purifier can get quite noisy if you use it for a longer period of time at the highest fan speeds. Nonetheless, the pros definitely outweigh the cons.

The Medify MA-40 2.0 is one of the best purifiers if you’re looking for performance. At the price asked, you should certainly consider it as the next air purifier for your home.

There’s a lot to like about it – the performance, the design, it’s compactness, and the price.