The Winix 5500-2 air purifier is a great choice for home owners who want to improve the air quality within their household. The device comes with a three-stage filtration, some very helpful controls, a sleep mode, smart sensors, 360 square feet of coverage, and remote control. 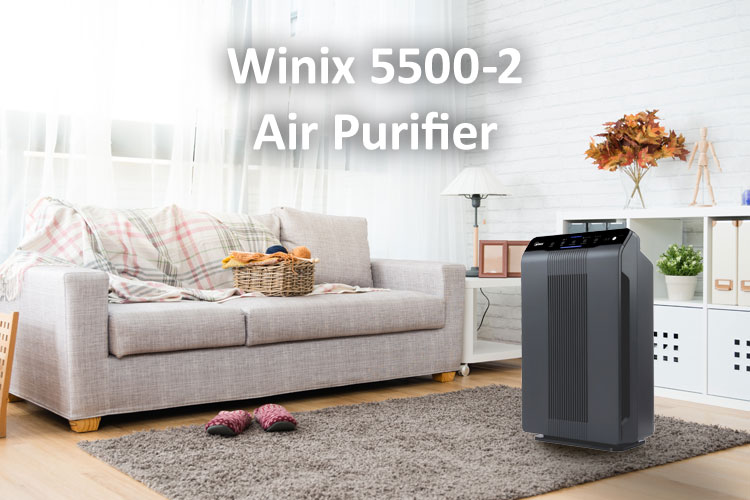 But what is there to know about this device? If you’re looking to buy this product, or any air purifier, for that matter, you should be paying attention to this device.

Whether you’re a pet owner, someone who’s suffering from allergies, asthmatic, or just looking to improve your indoor air quality, there’s something for everyone to like about this purifier.

The 5500-2 model is the newer version of the 5500 version, which was already a quality one. But this device takes it a step further. Is it durable enough, and does it provide a good enough value for money? That’s what we’ll take a look at in this article.

Overview of the Winix 5500-2 Air Purifier

Winix is perhaps one of the most well-known companies that produces products for treating indoor air quality. Air purifiers are at the core of their operation, and the 5500 series is their “race horse”.

Winix is a company from Seoul, South Korea. They’ve been on the market for a while, and they have a good track record when it comes to quality.

And we know how polluted the air is in South Korea, which is why this product was delivered in the first place – for South Korean households. That’s why you can be sure that this product will deliver this quality to you as well.

To achieve these amazing results, the purifier uses a three-stage filtration. This newer, 5500-2 version, uses the AOC washable carbon filter, which is a slight upgrade on the older version. And this filter is also washable, meaning that you’ll be able to reuse and avoid the extra costs that come with a new filter.

To complement the activated carbon filter, which gets rid of odors, there’s a True HEPA filter.

This is a well-known quantity in the world of air purification; it removes 99.97% of all airborne pollutants of 0.3 microns or larger. And there’s absolutely nothing wrong with it. In fact, it’s one of the better choices when it comes to filters.

There’s also the PlasmaWave filter gets rid of bacteria and viruses without using too much ozone.

To complement the filtration, we also have to mention the ability to control the purifier: 4 fan speeds, remote controls, smart sensors that indicate the air quality, a sleep mode, and a nice, elegant design. There’s a lot to like about the device.

When it comes to pros and cons, there’s some discussion points that we have to mention. While the PlasmaWave filter is a useful addition to combat bacteria and viruses, some will argue that it produces harmful ozone; although the provider explicitly tells us that no ozone is used for air purification.

+ Effective three-stage filtration that de-odorizes and improves the air quality.

+ Smart remote controls and a smart sensor that tells you about the air quality and when the filters need replacing.

+ Washable AOC activated carbon filter, meaning that you’ll save the costs of replacing it.

+ 360 square feet of area of effect, which makes it appropriate for larger rooms, bedrooms, living rooms, and other rooms.

– The PlasmaWave filter could emit ozone, although the provider says it should not produce it; some reviewers have noted this with the purifier.

– At higher fan speeds, it gets loud.

The purifier is good for various things; first of all, it’s obviously made to remove the airborne pollutants, which is an important feature for everyone. But that’s especially the case for allergy sufferers and asthmatics who constantly complain about these pollutants, as they can cause allergic reactions and asthma attacks.

But those who think they have a poor indoor air quality will appreciate the quality that this product brings to the table. Indoor air pollution is a real thing, and many people rather underestimate it. In fact, it has been named as one of the “silent killers” among the population, causing at least 4 million deaths, directly or indirectly. Smoke, mold, dust, pet dander, and other pollutants can all decrease the air quality.

In addition, if you have many foul odors and smells in your home, then you will certainly appreciate the activated carbon filter that’s also washable. You won’t need to replace the filter, which will save you quite a lot of money in the long-term. Additionally, there are also the True HEPA and PlasmaWave filters to complete the purification.

If you like to have control over your air purifier, this device gives you plenty of opportunities for that. Firstly, there are 4 fan speeds to choose from: the sleep mode, which is obviously great for when you sleep. At the highest level, you’ll be able to experience a premium level of performance, although you can expect the device to become somewhat loud.

What is the PlasmaWave Technology?

The PlasmaWave filter is the last filter in the air purifier, and it’s made to remove various bacteria and viruses, but also any smaller particles that may be left over from the other two filters. But how exactly does it work?

It works by emitting positive and negatively-charged ions in the air. These ions will wrap themselves onto the airborne pollutants to disperse them and remove them from the air. This discharge will happen very quickly – usually, in a couple of nanoseconds, so we won’t be able to notice it at all.

Some users have noted that this can emit and produce ozone, but is that really true? Most likely not. This filter only emits ions into the air, which, in smaller quantities, are not harmful to us. It’s a harmful technology if we’re exposed to it for prolonged periods. But for shorter bursts, it’s not a harmful technology for us.

But, as a preventative measure, you can always let your PlasmaWave filter do its magic when you’re not there – there’s an option to set it up just like this.

Changing filters on this air purifier won’t take you that much time. The first filter, the activated carbon filter, is washable, so you’ll only have to wash it. You won’t have to worry about replacement and the additional costs there. Although you might want to buy a new one after some time; after several months, or years, even.

For those who have large rooms in their home, they’ll like to know whether this device is enough to clean the largest rooms.

We think that yes, this purifier is a good choice if you’re looking for a device that can purify even the largest of rooms in your home. That’s mainly thanks to its relatively powerful operation, and the 4 fan speeds that you can choose from. Especially the fastest fan speed is the best choice for the largest rooms.

When the purifier works optimally, it’s capable of cleaning rooms of up to 360 square feet. When we say optimally, we mean that it can do that when the filters are relatively clean, and when you choose the higher fan speeds to do the purifying.

You won’t have to worry about the device’s capability to clean the largest of rooms in your home. This can be your living room, bedroom, basement, or even several rooms together. Placement also plays an important role – you’ll want to place it in such a way that it has access to as much air as possible.

Now, the big question – is this air purifier worth your money?

It comes with a three-stage filtration, some very useful features, relatively big area of coverage, smart sensors, relatively smart design and elegant style. While it might get loud at the higher fan speeds, and the PlasmaWave filter will bother some people, we think that it’s worth the asking price.

It’s the newer version of the 5500 air purifier, which was already an excellent device. And this one, without a doubt, takes it a step further. We think that you simply can’t go wrong with this purifier as a sensible choice.

The Winix 5500-2 is a crowd favorite, and for good reasons. It offers quality air purification, and some very nice controls that let you control how it works.

For that reason, we think that this purifier is certainly worth a go.